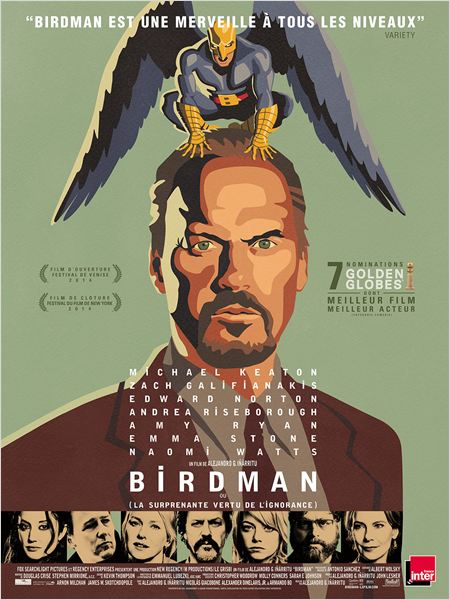 Birdman, the new film from director Alejandro González Iñárritu (Amores Perros, 21 Grams, Babel, Biutiful) tells the story of a has-been movie star, former interpreter of the superhero Birdman, trying to put on a play on Broadway in order to improve its image and to prove to himself that he can be a “real” actor. This project will lead him to reflect on his life and question in particular its relationships with people (with women, with his daughter).

Birdman is a very untypical film. It is made of a single sequence shot that lasts the whole duration of the film. And during this long sequence shot (which of course contains a number of disguised cuts), we cover about three weeks. And it is here that resides the prowess of this film: a single sequence shot that tells narratively about three weeks of the life of the main character, Riggan Thomson (masterfully played by Michael Keaton), and characters that surround him. This aesthetic form gives the film a particular narrative quality, and allows the viewer to be permanently at the heart of the story being told, and almost in complete harmony with the main character, Riggan.

Another ingenious creative idea is to have entrusted the drummer Antonio Sanchez for the music and to have used only battery as music throughout the film. This choice allows the director to vary the pace of the film at will, to highlight some particularly dramatic moments with an omnipresent battery while having other moments when the battery is almost absent. This aesthetic idea also gives a very special emotional quality to the film.

The work on the image by Emmanuel Lubezki is remarkable (He also did the photography of Gravity, Children of Men, and Y Tu Mamá También).

The rest of the cast is equally stunning: Emma Stone in the role of Sam, the daughter of Riggan; Edward Norton in the role of Mike, the prodigy actor with uncontrollable mood swings; Zach Galifianakis in the role of Jake, Riggan’s agent; Naomi Watts in the role of Lesley, an actress of the play that has feelings for Riggan.

And finally, even if the film talks essentially of the milieu of Hollywood and Broadway theater, the themes (taking stock of his life, questioning the quality of his relationships with his family, wondering what is really important in life, …) are universal enough that everyone can identify with the experiences of the film’s main character.