Being 14 by Hélène Zimmer 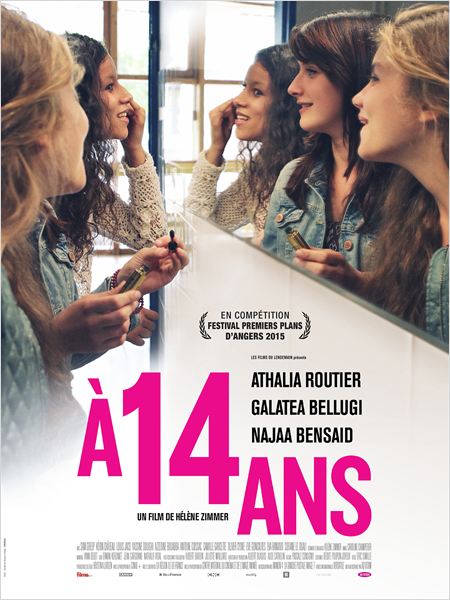 This is a first feature film that is really successful. Helene Zimmer began her career as an actress. She is also credited as the writer who did the adaptation of The Diary of a Chambermaid for Benoit Jacquot, to whom she dedicated this film.

Being 14 retraces the last year in Middle School of three girls, Sarah (Athalia Road), Jade (Galatéa Bellugi) and Louise (Najaa Bensaid). They live in a neighborhood in the western suburbs of Paris. And the experience of being 14 and in 8th grade is not always easy to go through. The film is structured in four parts, Autumn, Winter, Spring, and Summer, the last serving rather as an epilogue to the film. Through this last year of Middle School, these young girls will go through intense experiences that will have an impact on their way of being in relationship with others: quarrel between two of them, running away of one of them to go live with her grandmother, parties with alcohol and drugs where each one tries to find her place as a girl becoming a woman, the transition from a sexuality essentially verbal to a physical sexuality, and the experience of violence in a world (the Middle School) that appears to be essentially the world of the teenagers, and where adults are struggling to find a place. The families of these three girls are also all blended, and each girl lives this recomposition in a complex way and through rather strong reactions.

This is a world in which adults rarely penetrate and understand only poorly that Helene Zimmer allows us to discover in her film. And the strength of the film lies mainly in this way to be in the heart of the lives of these three young girls, almost without them being aware of it: a kind of docudrama about the beginning of adolescence. It is this experiential dimension that makes the strength of this film. We are literally in the heart of the experiences that these girls live. We feel with them what they feel.

This energy and strength that the film delivers is in my opinion based on several elements: the choice to use a lot of sequence shots, allowing us to be with the heroines of the film; choosing a handheld camera, which also gives the impression of being part of the scene we watch (note the beautiful work of the cinematographer, Caroline Champetier, to whom we owe the magnificent Villa Amalia by Benoit Jacquot, or the beautiful Of Gods and Men by Xavier Beauvois); really amazing and extremely well directed actresses.

A powerful and fresh film, which addresses without moralism or judgement important themes, and makes us reflect on our responsibility vis-à-vis future generations and what we want to convey to them, especially through their entire educational experience.