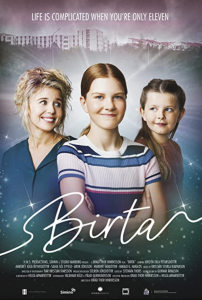 Birta is the new feature film by Islandic director Bragi Thor Hinriksson. It tells the story of Birta (Kristín Erla Pétursdóttir), who accidentally hears her mother speak to a friend on the phone, and tell her that they may not celebrate Christmas for lack of money. What, for Birta’s mom, is mostly a way for her to vent out some temporary difficulties, becomes a trigger for Birta to help her mom and collect money in order to save Christmas.

The script of this film was developed by Helga Arnardóttir, Bragi’s wife. And they have then decided to produce the film themselves, in order to keep as much creative freedom as possible. It gives to the film a great unity, in term of story, as well as the means that are put in service of this vision.

Let us note for instance the magnificent work of the cinematographer Ívar Kristján Ívarsson, which embraces the visual codes of a Christmas fairy tale (glowing light, bright colors, snow, etc.), while at the same time telling a very realistic story. The music by Kristján Sturla Bjarnason is also particularly adapted to the story, and underlines beautifully its emotional moments.

The acting is also amazing, and in particular Kristín Erla Pétursdóttir (playing Birta), who won the best acting award for her role at the 26th Schlingel International Children and Youth Film Festival in Chemnitz, Germany. The actress playing her younger sister Kata, Margrét Júlía Reynisdóttir, is also amazing, as well as Salka Sól Eyfeld who plays their mom.

Birta is also a story about a young girl who takes on her shoulders the role of parent, thinking wrongly that her mom won’t be able to take her responsibility. At the end of the film, once the misunderstanding has been clarified, Birta is allowed to be a kid again.