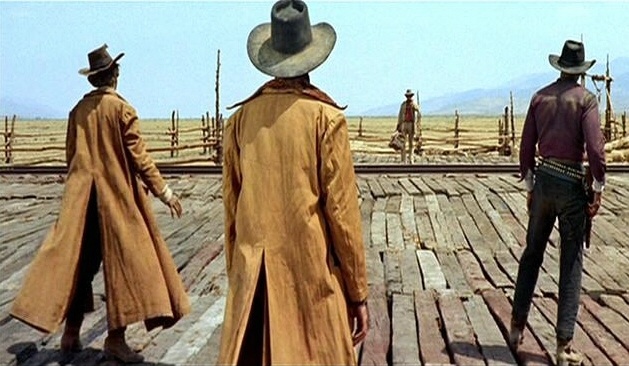 Sergio Leone on a big screen

I had never seen any of the films by Sergio Leone on a big screen. I was not born when they were released or too young to go see to the last ones, and I didn’t get a chance to see them through the various summer and other retrospectives. It’s now a done thing! Indeed, the French Cinémathèque decided to propose a retrospective of all Sergio Leone films during the Autumn 2014. I went three times in the beautiful Henri Langlois movie theater, the great hall of the Cinémathèque, which is more than 400 seats! For The Good, the Bad and the Ugly, Once Upon a Time in the West and Once Upon a Time in America. Each time, the room was packed. A room full of aficionados, of fans. How could I dream of better conditions to see these great movies?

And I must admit that one can only fully appreciate the talent of Sergio Leone by seeing his films on a big screen. It is as if I had never seen them before, as if I was discovering them for the first time.

Take for example Once Upon a Time in the West. From the very first images, we see three bandits literally occupying gradually the space of a train station lost deep in the American West, with a multitude of small details that convey the heavy atmosphere of the scene. How could you fully feel this use of the space if you weren’t watching this movie on a big screen? And from the very first images of the film, there is this sound work of an extreme and effective precision and, of course, the formidable (legendary?) score of Ennio Morricone, also the author of the music of the two other films.

From then on, from the first to the last frame of the film, there is a firework of cinematic experiences. The photography is remarkable in this film as well as in the other two. The work of Tonino Delli Colli, with whom Sergio Leone worked for these three films, but also other great filmmakers (for instance Louis Malle in Lacombe, Lucien, Jean-Jacques Annaud in The Name of the Rose, or Roman Polanski in Bitter Moon and Death and the Maiden), is remarkable.

And then there is of course the direction of Sergio Leone: his masterful use of the space, a model of its kind; his use of zoom lenses to get into the heads of the characters and their emotions; his use of extreme close-ups to amazingly enhance all the gazes; etc.

Three great films to see again and again, but especially on a big screen!