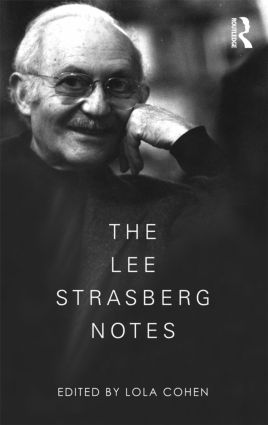 The book that Lola Cohen edited and put together, after many years of dedication and faithfulness to the work of Lee Strasberg, is undoubtedly very important. First, because of the methodology she used to edit it. She watched hours and hours of recorded tapes of Lee Strasberg teaching students, most of these tapes recorded toward the end of his life, and therefore containing the essence of a life spent acting, directing, teaching, coaching, and thinking about the craft of acting. Second, because Lola Cohen was herself a student of Lee Strasberg during the last years of his life. She therefore practiced all the exercises of the method described in the book under the direct supervision of Lee Strasberg himself.

In Lee Strasberg’s words: “The Method is an amalgam of the work of Stanislavski, Vakhtangov, Meyerhold, and the Group Theater. Observing and analyzing their work is essential in forming a practical comprehension of the theoretical approach of our work, the training, and its use in diverse forms of production. People would be mistaken if they looked to any of these sources as independently embodying the Method.”[1] The Method is an amalgam of several things, the work of a whole life, Lee Strasberg’s life, spent searching, exploring, experimenting. It is a pragmatic approach: whatever works. But whatever works in Strasberg’s words has been tested by him and by many of his students over a period of several decades. And this book gives a very interesting account of the resulting technique.

The book is divided into six parts. The first part, “Training and exercises”, is a very thorough account of all the techniques used by Lee Strasberg in his teaching. They are all very precisely described. They include relaxation, sense memory, emotional memory, animal work, song and dance, movement and sound, and some voice exercises. There are also many explanations in Strasberg’s words about these techniques, what they try to achieve, and why they work. In my opinion, this is the great added value of this chapter. Using the book alone to train as a method actor wouldn’t be such a good idea as most of these exercises require some sort of supervision, an outer eye. But the book definitely gives a deep insight about each exercise. I have been trained as a method actor and I have practiced each of these exercises for several years, and I still learned a lot of valuable things when I read the explanations of Lee Strasberg on each technique. This chapter alone is a great resource for actors, acting teachers or acting coaches, as well as directors and filmmakers who want to improve their understanding of what it means to direct actors, and particularly method actors.

The second part, “Characters and scenes”, explains how to use the exercises when working on a character in a scene or a play/film. This is a very important part because, once the basic exercises are well mastered, it is not always obvious to know what to do with them in situation. I was lucky enough to have a great teacher while I was at school, and not only was I taught the basic exercises, but also how to apply them to my work as an actor. But some of my schoolmates didn’t have that chance; they knew the basic exercises very well, but didn’t always know what to do with them. This second part would definitely provide them with some of the missing information.

The third part, “Scene critiques”, is Strasberg’s account of certain characters in some very well known plays. He gives some information he believes an actor portraying these characters should keep in mind while working on them. This information is usually very practical and interesting, and it may or may not relate to the actor working on these parts, but it would nonetheless raise interesting questions.

Part four, “Directing and the Method”, is a very interesting account of Strasberg’s work as a director. He discusses various aspects of the director’s work: how do you achieve your vision, how do you work with actors, casting, designing your show. He also gives the typical outline of a four weeks rehearsal process, which he developed over many years of practice as a director. This chapter is very helpful for any director who wants to get a better understanding of the relationship between a director and the actors, and particularly method actors. It can also help actors understand the preoccupations of a director, and how they can help the director shape the show while keeping their process personal and creative.

Finally, part five is about Shakespeare and Stanislavski, and part six is a collection of thoughts on various topics related to theater.

This book is targeted to actors, directors, filmmakers, and anyone working in theater and film who is interested in the craft of acting. Anyone reading this book will learn a great deal about method acting.