This project provides documentation and reflection on a dinner that utilized techniques of clay cooking. The artist’s text is a corporeal genealogy of clay cooking and the submedial rifts it produces between microbes of clay, foodstuff, and bodies.

Each vegetable transfers something to the other. Butter and salt vitalizes their essence, each diffusing its affect into collectivized whole. Old friends were introduced to new ones while clay I molded around vegetable parcels hardens in the oven. Our stomach’s infectious groans can be heard in the distant present.

Clay is formed from minerals and water, mountains wrinkled and abbreviated, brutalized rock residue. Practices of clay cooking have for centuries now served as a kind of gastronomical encounter with this material force of geology. Clay pottery pieces discovered over 6,100 years ago were found carbonized with the fish, meat, and spices they once contained. In preparing for dinner, my recipes were culled from the ancient traditions of clay cooking from across the world, an idea I first got from the Dutch “eating designer” Marije Vogelzang. Clay cooking encompasses techniques as ubiquitous as the pancake. Moroccan Tagines are perhaps the most familiar, but I was also drawing on the kelphtiko pots that kept food warm for Greek bandits on long journeys, Sač’s from the Balkan Peninsula that predate convection ovens, and ancient European practices of burying game underground in clay to hide the smoke from enemies. 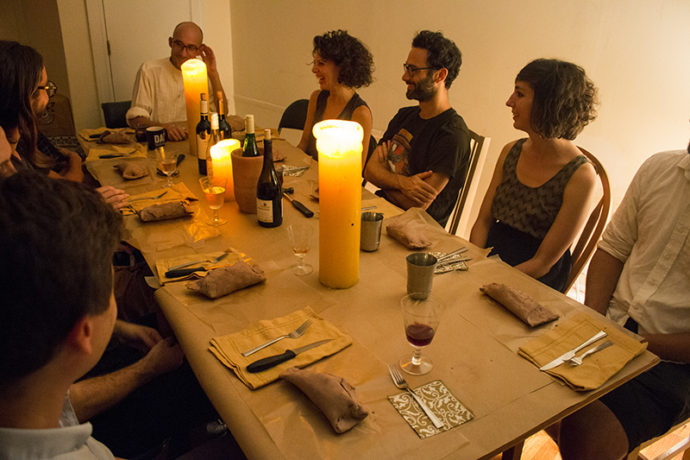 A small purple radish, a stick of asparagus, a cauliflower floret, a quail egg, a thick slice of carrot, a miniature shallot, and a sprig of dill weed have been salted, buttered, and combined in a raw cabbage leaf, which is a kind of placenta that protects the food within the clay pouch. It’s not fermentation, but something is occurring here that is unsanitary, an etiologic intimacy between earth, plant, and body. There is micro-life fornicating in this clay and the guests are glassy-eyed imagining the pornography of it as they grip their hammers in eager anticipation. As we begin shattering and crashing into this vegetal treasure trove, a sense that we are coconspirators in the destruction of ambivalence pervades the room.

Perhaps most significantly, cooking with clay, as a constellation of practices, offers a way to consider how the enzymic transformation between food and mud also transforms sociality. After the initial strikes, the vessels crumble into smaller pieces like tree bark from an axe, then a long emerald pause rings in our eyes. Everyone stops being guests and instead, as the rabble gives way, as cordial dinner tables splinter, the sense that there is always something more important to be said, that hunger precedes consumption, feels meaningless.

A whole chicken rubbed with salt, pepper, fresh rosemary and thyme had been encased in clay with garlic and fingerling potatoes. The chicken’s great song ballooned with ardent pungency in the heart of the oven. Larger and more satisfying to destroy, the clay foundry that encased this bird is perhaps most defiant towards the sociologist Erving Goffman, via the scholar and historian Margaret Visser, who notes that “the purpose of dinner-table conversation is partly to force people to go through their paces: to show that they have learned the rules and ‘polished’ themselves, and will therefore, in the estimation of the company, ‘do.’”[1] I stand on the table and sing the chicken’s song before dropping the sculpture to a crashing finale. 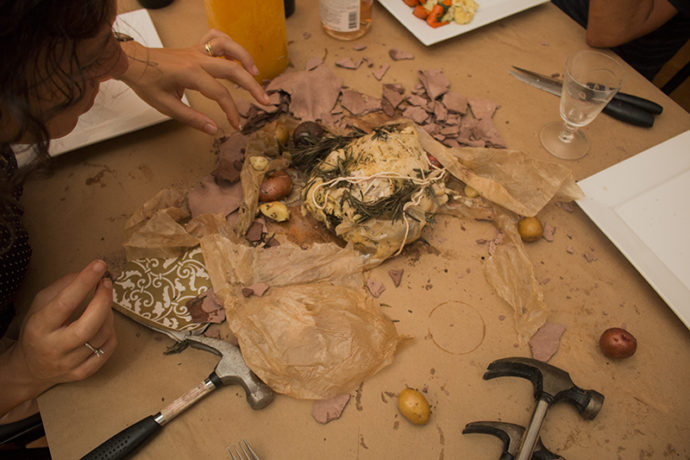 Ghost bird. What violence? I wonder what pleasure you have found here. You are not only image or smell, but also a temporal vitality that finds meaning in our physical contexts. It is in my dark furtive organs that your song deceives, proposes, and demurs. The condensation and displacement of stomach emotions produce a glorious maturity achieved not like wine, but a ripening heated by self-consciousness.

I begin by pouring abundant heaps of sugar, almond dust, chocolate, coconut flakes and candied nuts over the table in gestures of revolting and grotesque excess. Four perfectly spherical chocolate balls complete the picture. Each is filled with candied pistachios, almonds and hazelnuts, rich chocolate mousse and a fresh strawberry. As I dance I pour piping hot milky caramel sauce onto the spheres, melting open their contents onto the table in a molten mess. 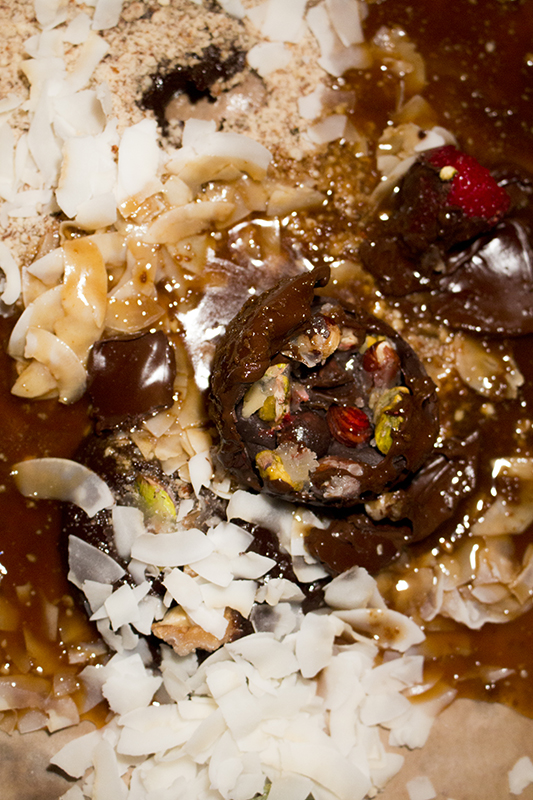 The craft of maceration is wetted and cloying in moon glimmer. We are all breaking a sweat in the midnight satisfaction of overabundance. A fiery battle fought in the microbial forest of the gut but quenched in the light of the mouth’s wickedness. As fluids spill off of the table and onto the floor into a sweet monstrous mess we enter a trance of brainless consumption.

Guests attempt to eat the dessert, to grasp at it with spoons or lick what they could off of the table in toothsome vertigo. Conversations shift into laughter; laughter into gorged distress. The word “delicious” has never been redder with the breath of Dionysus hot on our throat. In our stupor of inebriated satiation, joy trembles are swallowed like the nausea of a wiry yoke. Sprays of sweet cadence now appear as the geography of war. We had found the jam tree, the polysemous froth of knowledge, the commensurate taste of nourishment. 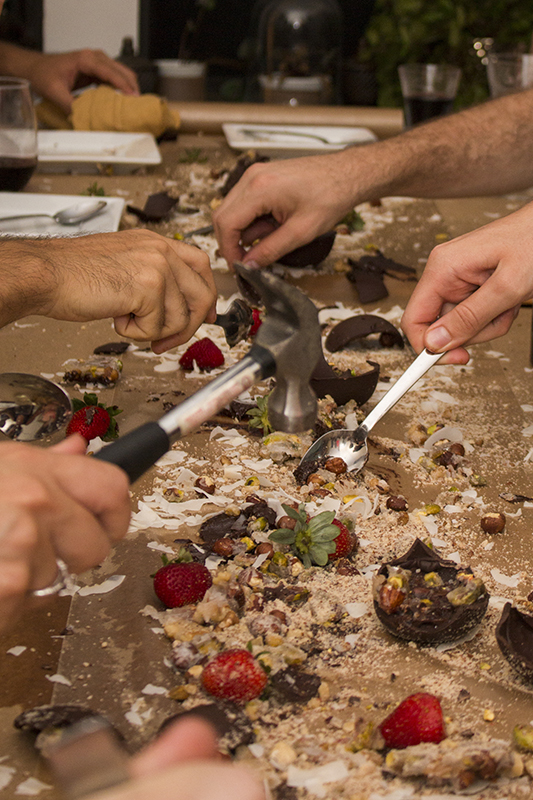 Food has long provided the ultimate social conditions by which communities are formed.  Ethnographers studying family, gender, economics and ritual gatherings have always had to contend with the incredible evidence of food as central to meaningful social encounters. This fact has been lost for me in a city of fast meals and quick encounters and so this dinner party was meant to awake a dormant and vitalizing socialization centered on food.  Key to the success of the evening was the clay itself, its hard form breaking open the very first moments of conversation.  While there was chaos, the point was not unhinged lunacy but rather to produce submedial rifts in guest’s behavior, a new kind of nourishment fed conversations as simultaneously etiquette and social codes were breaking around them.  Digging into the clay for the first time, laughing unexpectedly or watching someone tear into chicken with their bare hands effectively sketched an embodied genealogy of clay as it has been used in the process of cooking.  It was an archeological dig of the self around the dinner table.

Extra special thanks to Devin O’Hara and Krystalla Pearce for their help preparing the meal.