The Artist-Researcher: Paradox or Tautology?

To Cite this Article

For many years I would take long walks along the water, either early morning or late afternoon, seeking that light which photographers so admire. In New York along the beach at Sunken Meadow State Park (giving on to the waters of Long Island Sound, an estuary of the Atlantic Ocean), in Paris around the bassin de la Villette, in Kyoto along the banks of the Kamo and Takano rivers or along the Path of Philosophy, and in Nice on the sentier du littoral following the Cap de Nice, with the Mediterranean stretched out before me. When describing these walks, I would explain (to both others and myself) that I thusly sauntered to reflect upon my current projects, especially when they were in the formative stage, hoping for some sort of intuition, indeed revelation. Once, during the dog days of summer, I arrived just before sunset at Sunken Meadow beach to witness a surreal and most disquieting scene: the waters were totally still and smooth as a mirror, as far as one could see there floated countless huge jellyfish, and the air was full of dozens of sea gulls frenetically diving into the water to feast upon this living delicacy. Not the tormented sea of a tempest, sign of the sublime purported to transport us to transcendence, feared and desired as the thought beyond all thought; but a cruel, nightmarish image – where the stillest, pellucid calm was shattered by pure murderous frenzy – which touched the quick of immanence. As in a dream, I felt as if I were simultaneously jellyfish, gull, and ocean. Upon returning home it struck me that never in all those years of strolling did a single new idea ever occur to me, and that in fact what I was doing was simply clearing my mind. I had been encumbered with all too many ideas, not too few. I discovered that I could, in fact should, occasionally do without any words whatsoever, such that the resurgence of pure images would guide my work.

When asked to write this editorial about the artist-researcher, I felt somewhat as I did before that grotesque scene on the beach. It was as if the researcher in me were requested to perform a cruel self-criticism, while the artist mutely signaled from the depths. At that moment of ghastly revelation on the strand, nature had enacted its own version of a scene that had long troubled me, but which I could not – dared not – articulate. About a decade ago I had decided to create a marionette theater Danse macabre using the extraordinary rag dolls of French artist Michel Nedjar. I had long been fascinated by these morbid creations, personifications of anguish, simultaneously memento mori and emblems of resurrection, paradoxically creations in order to remember and remembrances in order to forget. 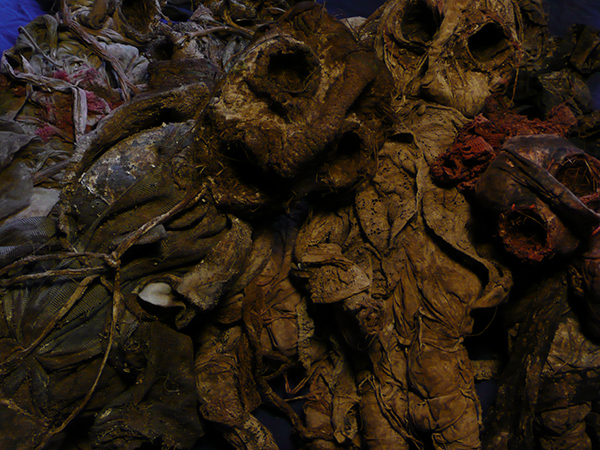 They effectuate a return of the repressed, a precarious overloading of the memory system that permits a mourning without which history itself is an abomination. These anxiety-producing objects evoke a counter-sublime, indicating those terrors, inexorable and insidious, that exist both in the world and within ourselves. A particular sensibility, not conceptual, iconic or symbolic, but transformative and iconoclastic, is needed to situate them. I have always been intrigued by the troubling relationship between dolls, puppets and marionettes, thus – inspired by Antonin Artaud’s reflections on masks and puppets, as well as Edward Gordon Craig’s theories concerning the Über-marionette – I wished to experiment in the realm of performing objects to get a better sense of these dolls, and to perhaps join their destiny to my own. 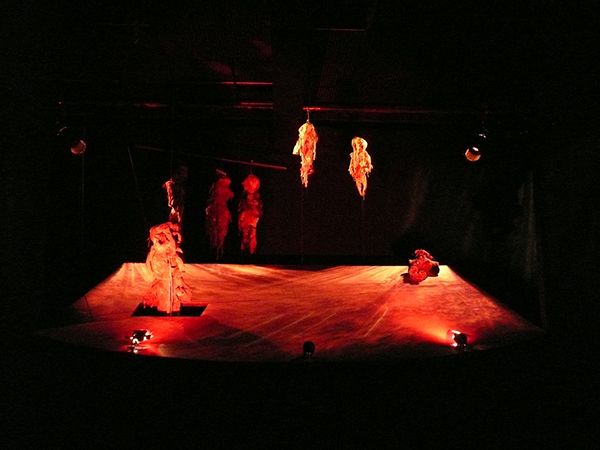 One must imagine my shock to realize, only after the first rehearsals with puppeteer Mark Sussman, that in fact what I had conceived was a Holocaust memorial! These dolls were a conduit to that moment of history responsible for my very existence on earth, but which I had always been incapable of, in fact resisted, expressing in any manner whatsoever. For indeed, every dance of death is historically situated, and the family histories of Nedjar, Sussman and Weiss are profoundly marked by the Holocaust. What I could not say in words I expressed through these dolls, who themselves remain mute. The recorded soundtrack of Danse macabre, created by Gregory Whitehead, consists of the voice of Nedjar telling the tale of the dolls in Yiddish-sounding babble, pure nonsense verbalizations, which become more and more lugubrious and disquieting as the piece progresses. One day an elderly Jewish woman was among the spectators, and when the play was over she went up to Nedjar and told him: “I understood every word.” 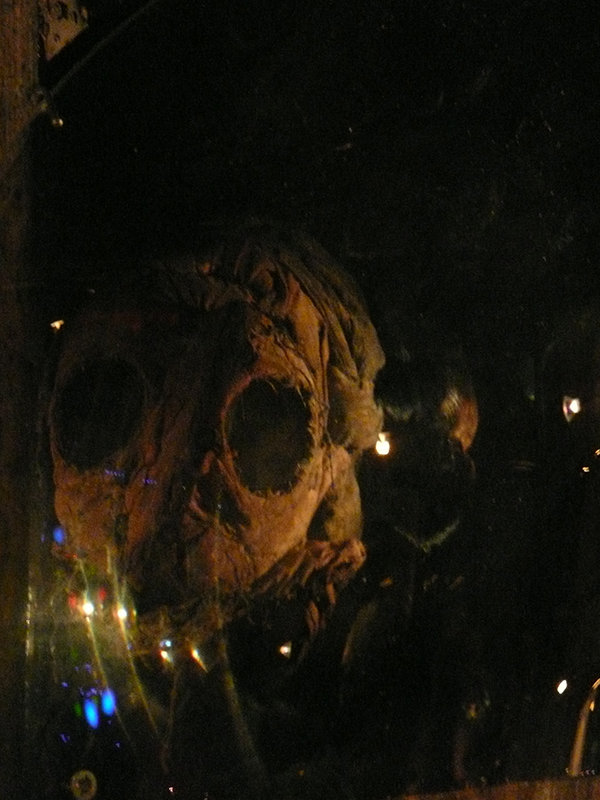 One only need believe in the existence of unconscious thoughts and motivations – not to mention the inherent polyvalence of language and overdetermination of speech – to postulate the necessity of the artist-researcher. Certainly, any theory that doesn’t demand self-reflection on its very means of expression contains a tragic blind spot. Furthermore, many situations demand images rather than concepts, suggest anecdote rather than theory, invoke singularity rather than generality. Quite often only images and gestures can provide access to the most hidden desires, can connect us with the most traumatic moments of history, can offer a representation of what is otherwise unspeakable, indeed unknowable. One of the most poignant examples in our philosophy of the intellectual power of imagery is to be found in Friedrich Nietzsche’s Thus Spoke Zarathustra. Here, the central enigma of the book, the notion of the Eternal Return (for Nietzsche the secret of the highest form of consciousness), is not once enunciated, not even by Zarathustra to himself, but only alluded to, expressed obliquely, in dreams, whispers, feverish hallucinations, circumlocutions, silences, ellipses. It is as if the entire volume – a philosophical tract in the form of an epic novel – existed only as a dramatization of an inexpressible truth, the pure mise-en-scène (in Artaud’s expanded sense of the term) of a concept. Nietzsche understood metaphysics as malady, theology as torture.

Ever since the Romantic revolution of the early 19th century overturned the hierarchies of Classicism – a critique that marked one of the fundamental origins of our modernity – art has become a form of experimentation, without any regulatory a priori  whatsoever, the work of a protean subject. Might not syllogistic thinking – the basis of Western philosophy from Socrates, Plato and Aristotle onwards – be antithetical to the truths born in images and gestures? Antonin Artaud – having traversed madness, erotic catastrophes, apocalyptic torments, cosmic punishment, death-in-life – understood this: “It is the functioning of the organism that one can call syllogistic that is the cause of all illnesses, by the door that it leaves open to the alternative: why, how, because, therefore, from which.” [“C’est le fonctionnement on peut dire syllogistique de l’organisme qui est cause de toutes les maladies, par la porte qu’il laisse ouverte à l’alternative : pourquoi, comment, parce que, ainsi donc, de ce que.” [Histoire vécue d’Artaud-Mômo, Tȇte-à-tȇte (1947), in Oeuvres complètes, vol. XXVI (Paris, Gallimard, 1994) 157-158.] Already as early as The Theater and its Double, he called for a new type of non-conceptual expression which, “finally breaks the intellectual subjugation of language, by giving meaning to a new and more profound intellectuality, hidden beneath gestures and signs raised to the dignity of special exorcisms.” [Il rompt enfin l’assujettissement intellectuel au langage, en donnant le sens d’une intellectualité nouvelle et plus profonde, qui se cache sous les gestes et sous les signes élevés à la dignité d’exorcismes particuliers.” [Le théàtre et son double (1938), in Oeuvres complètes, vol IV (Paris, Gallimard, 1964), 108.] He grasped the human being as a living antinomy in its most performative sense, simultaneously a body producing signs and the body acting as sign. His last works – illogical, inarticulate, violent, scatological, blasphemous, apocalyptic – are not discursive but performative, magical exorcisms not meant to be understood but rather to transform, not intended to fascinate but rather to protect, to repel. Here is the ultimate implosion of the Romantic sensibility, where the presence of death disarticulates all that life and language have so finely wrought. Artaud’s final image of the body without organs is not unlike that of Nedjar’s dolls: the simulacrum of the body, an object of the most profound psychic projections, the ultimate floating signifier. Such is particularly adequate to express, and to counteract, that most empty of signifiers, death. Nedjar’s dolls and Artaud’s last writings and drawings are thaumaturgic, fulfilling the antithetical conditions of magical objects: simultaneously practical and aesthetic, constructed and confabulated, causally projective and psychically introspective. Here, life is expressed not through icons or metaphors, but as metamorphosis; not through normative forms, but as abnormal deformations; not as signs of a collective unconscious, but in its moments of radical singularity; marks of accidents, not essences. How, then, are they to be grasped? These are performative objects, not sculptural or textual ones; they demand mise-en-scène, not display or interpretation; they question the separation between performance and theater, performance and display, performance and discourse. They demand the intervention of artist-researchers like Nietzsche and Artaud, anti-metaphysical celebrants of the body. To omit the innate, inarticulate, corporeal dimension from our disciplines would be to miss the essential. For isn’t this form of expression – incarnating the poetry of the body – precisely what we call performance?