Posted by the editor on Jun 04, 2017 in Cuisine and Performance

Preface by A. Sepahvand

It could be written above the entrance to the Garden of Earthly Delights, a dictum to those who seek refuge, a reminder of where we come from and where we are going: “We have no knowledge but what has been built up by pleasure, and exists in us by pleasure alone.” We will take these words seriously, penned by William Wordsworth in 1802 as part of his masterpiece Preface to the Lyrical Ballads. Waiting silently in the antechamber, an attendant emerges to beckon you inside, across the threshold. You step foot into the garden. But wait, there is no grass growing, only concrete, metal, glass, and wood. The silence pervades, hushed attendants delicately floating around the room, carefully attending to those other fortunate few who have already sat down to enjoy a cup of warm tea. Only the sound of whispers, the crinkle of fabric, the gentle slurping of hot drink, and the white noise of the park nearby, its autumnal state wet and lush, as the vibrant potency of summertime greenery fades into the misty harvest season. The forest is especially alive as it gets ready for sleep. The air is crisp, moist, and chilly. Even better, for what is on offer is tea, not only to warm up cold bodies, but to stimulate a relationship of pleasure between the inner and outer worlds so that knowledge may infuse the atmosphere.

The Tea Garden was a spatial intervention and a ritual practice that took place for two days during the conference A Matter Theater at Haus der Kulturen der Welt in mid-November 2015. A project by Benjamin Alexander Huseby in collaboration with Denise Palma Ferrante, the sensory and material situation on hand presented itself as both herbarium and tearoom, where a collection of wild-foraged and locally-grown leaves, flowers, seeds, and fungi were available for bespoke botanical infusions. Located between interior and exterior, the space was set up as a pavilion structure flanking the western side of the Haus as it opens out into the Tiergarten from the side entrance of the main auditorium. A demonstration of worldly pleasure-knowledge, the Tea Garden offered respite during the busy days of the conference for visitors to sensualize their minds and bodies through drink, care, meditation, and togetherness towards a more intimate, embodied modality of being-in-the-world. As part of the finale for the two-year Anthropocene Project, an investigation into the changing relationship between Humanity and Nature in the urgent here and now of climate change, the Tea Garden served as a situated exercise in how to compose a world out of the ruins of a civilization that has pillaged the Earth in the name of science, progress, and objectivity. The task at hand is not to elaborate on a critique of the horrors that have resulted from the West’s disenchanted exploitation of the planet, nor to overstate polemic narratives of right versus wrong doing. If the Earth has indeed entered into an irreversible state of transition, if anthropogenic meddling into the ground and the sky has initiated long-term metabolic ruptures within the planetary eco-system, then it is immediately clear that the only way to continue is to insist on living differently, on living beyond the disaster, on developing practices that sensualize, sensitize, and attune humans to the flows traversing the macro and the microcosmos. No, not only “a god can save us now”, rather, we seek that “god from within”, the creative capacity to imagine, the long-lost entheogenic tradition of the potion-drinkers, the Night Healers, the wandering souls of the seers, diviners, oracles, and shamans. An intoxicated sage sings praises to the plant-world, his words are left over in the fragments of the Rig-Veda: “The drinks have lifted me up, like swift horses bolting with a chariot … In my vastness, I surpassed the sky and this vast earth … Yes! I will place the earth here, or perhaps there … I am huge, huge! Flying to the cloud. Have I not drank the Soma?”

Soma here escapes our immediate reach; instead, we have a long list of plants, heimisch as well as nomadic: hazelnut, gingko, juniper, dog rose, beech, sloe, shepherd’s purse, mugwort, meadowsweet, ground elder, linden, camomile, dill, wormwood, and more. Each visitor to the Tea Garden receives a consultation in the form of an idiosyncratic survey inquiring into his or her current mood, predispositions, tastes, and tendencies, the answers to which form a fleeting “self portrait” of physio-emotional constitution at the time of arrival. These surveys are then used by the garden attendants to concoct a special selection of plant and mineral carefully assembled from the gorgeous display installed in the space. Boughs and bouquets are delicately placed around the room, invoking minimal ikebana arrangements or pagan altars to the goddess of the wood. Drawing from various traditions of fortification and restoration centered on drink, the healing and stimulating properties of each brew provide the visitor with a taste of the pharmakon – that tenacious messenger that incorporates the environment into our bodies. Sometimes cure, at other times poison,  the pharmakon is always a substance, whose introduction into the body reveals both the joys and sadnesses of worldly immersion. What is this, mere superstition? Magic? Witchcraft? Medicine?

Indeed, the tradition of the witches is one that deserves reconsideration, especially when faced with the task of resuscitating pleasure-knowledge and creating a sustainable mode of being-in-the-world. As both Marxist scholar Silvia Federici and feminist activist Starhawk have shown, the ‘Burning Times’, when women, the poor, and the socially marginalized were persecuted and murdered between the 15th and the 18th centuries in Europe and the Americas, were a period in which a new regime of scientific objectivity, mercantile authority, and political territoriality emerged. In this Modern world order, the basis of our current civilization, all forms of non-official knowledge were to be eradicated and taken over by the “expert”. Access to the commons, whether as land or as the very body itself, was to be privatized and monetized. Social roles were to be re-organized around productivity and credentials. This Great Enclosure, the dawn of a culture of estrangement and the end of a regime of similitude, successfully silenced the voices of those who did not fit the requirements of power, property, and capital. Healers and women especially suffered. As Starhawk writes, “to destroy a culture’s trust in its healers is to destroy that culture’s trust in itself, to shatter its cohesive bonds and expose it to control from outside…Healers provide models of knowledge, competence, and worth…They uphold the values of immanence, of the spirit present in the world, of worth inherent in nature and all living creatures – values that oppose exploitation of natural and human resources.” What the Tea Garden presents each visitor with is not a “new” way of being-in-the-world, but a very old tradition of attuning oneself to the common ground of life, surrounded by the experiential framework of the environment, the first order through which knowledge is gained by doing – through tasting, testing, smelling, taking care. The secrets of the vegetal and mineral worlds are part of a history of imagination that informs the very future world we are responsible to compose. Scientific objectivity has achieved great technological advances, but it has also been the catalyst for oppression and destruction, our current climate crisis notwithstanding. In many ways, this is due to a mechanistic worldview that wages a war on immanence through the disembodiment of thought. The body is more than a thinking head: it is a strange and full archive deeply encoded by the transfigured traces of the nonhuman world – plants, stones, and animals are inscribed into carnal memory, leading a mysterious afterlife as interlocutors of our existence. To reintroduce the pleasures of ingestion and the wonders of the pharmakon means to think without the head, to become-plant. Still, silent, and growing. 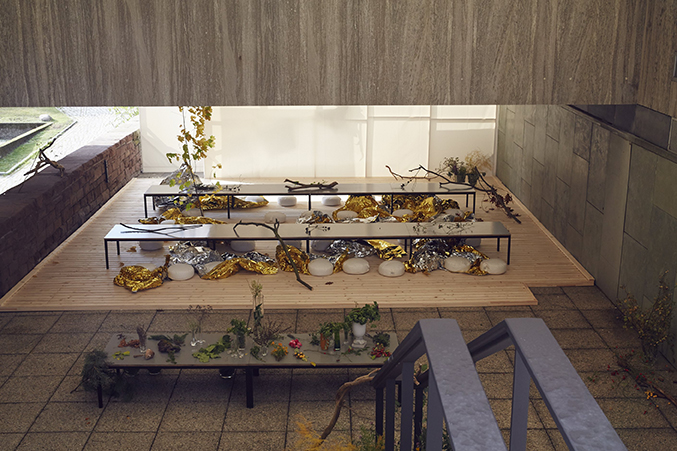 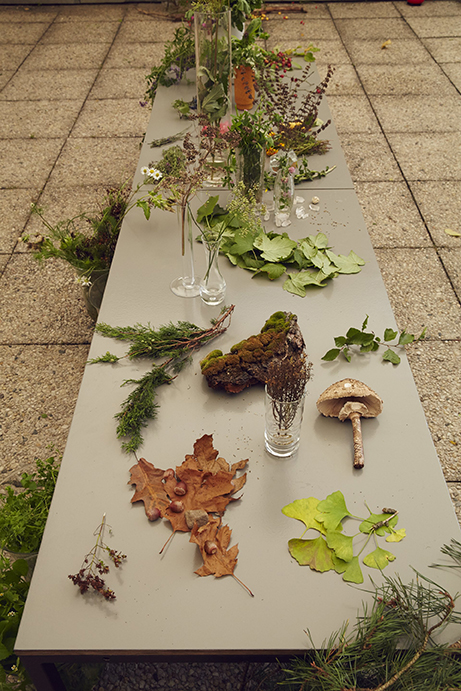 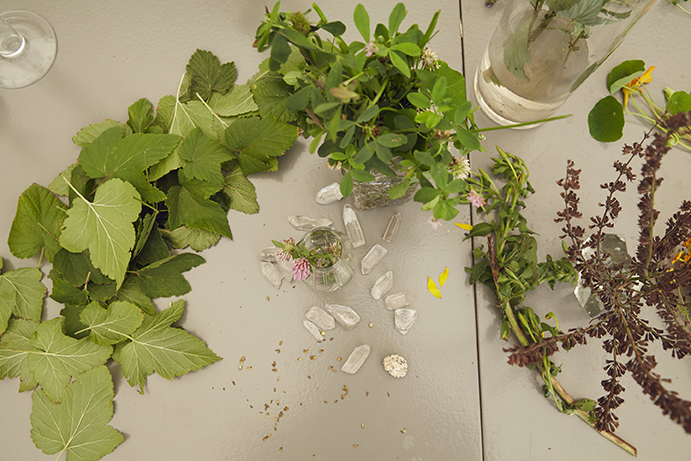 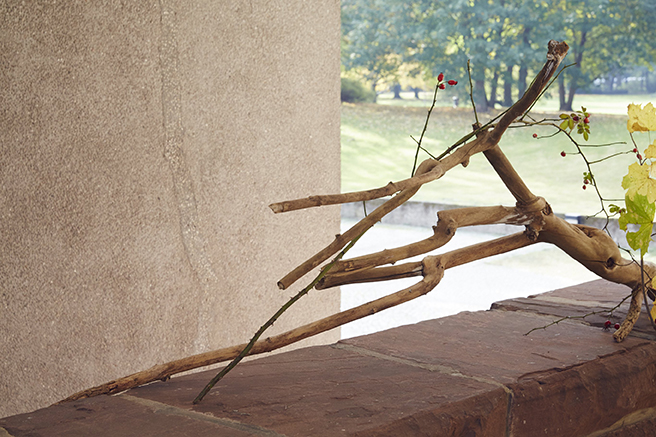 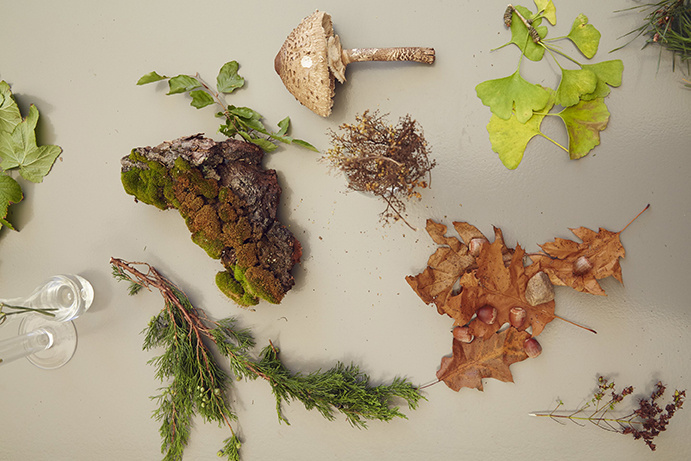 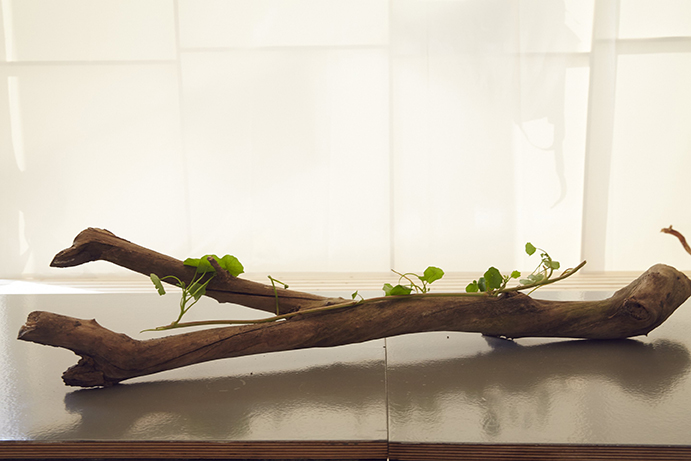 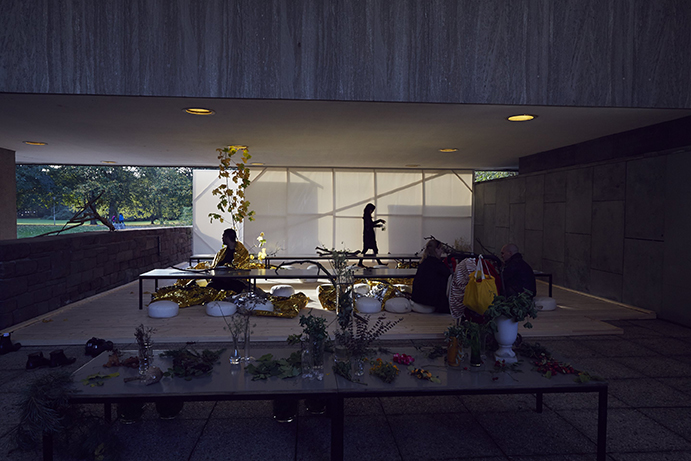 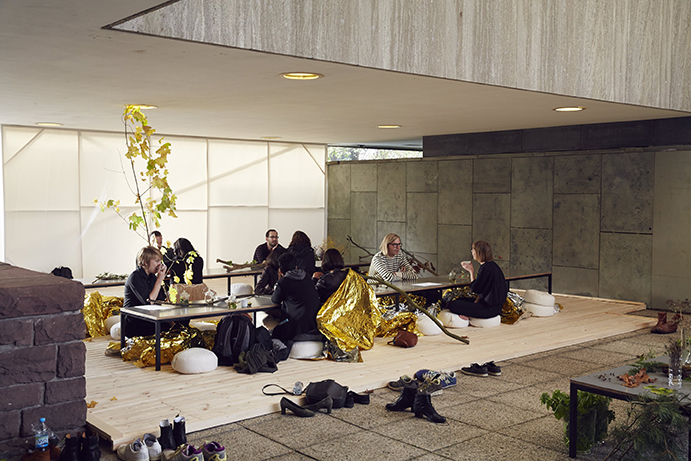 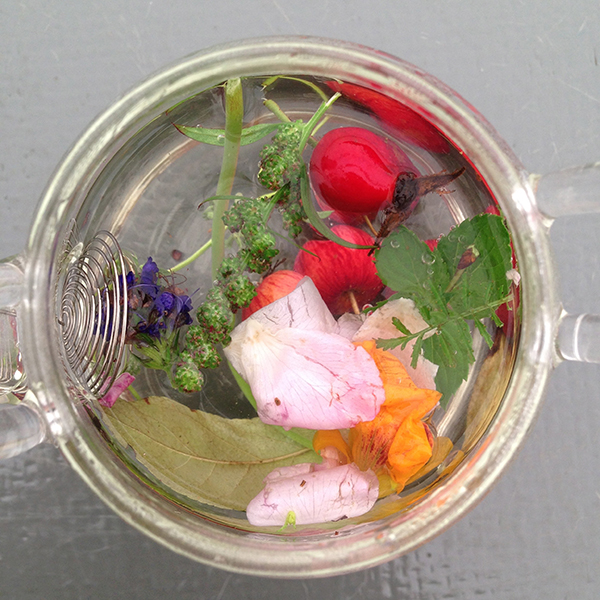 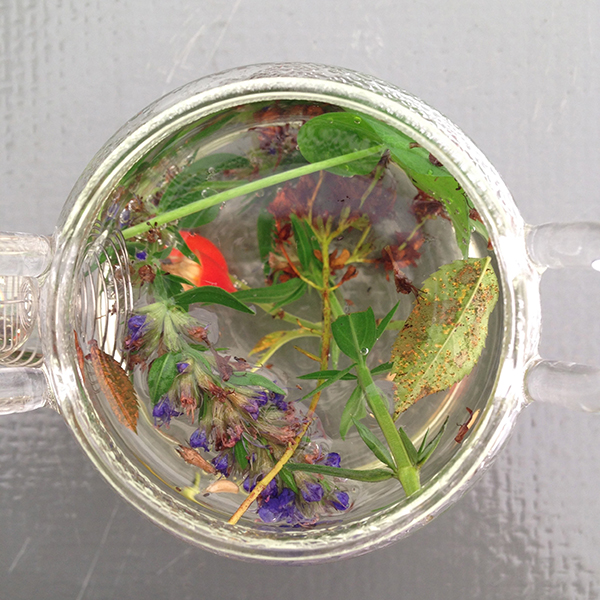 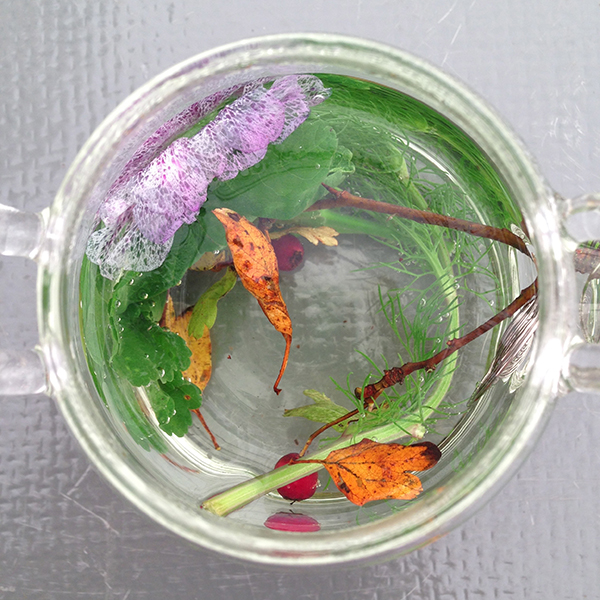 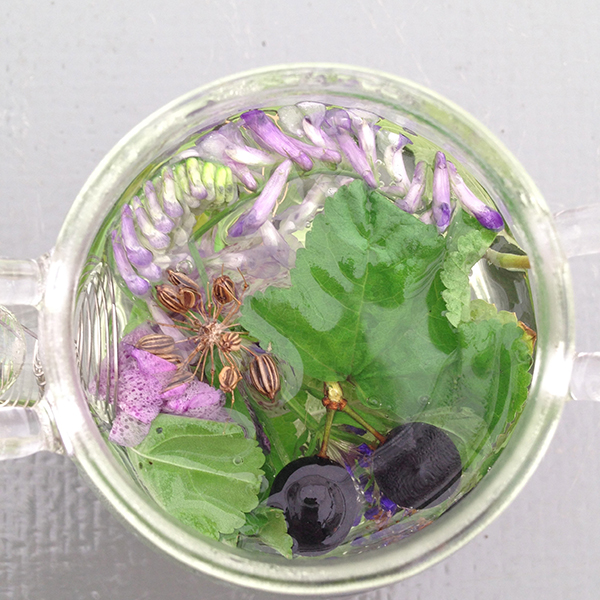 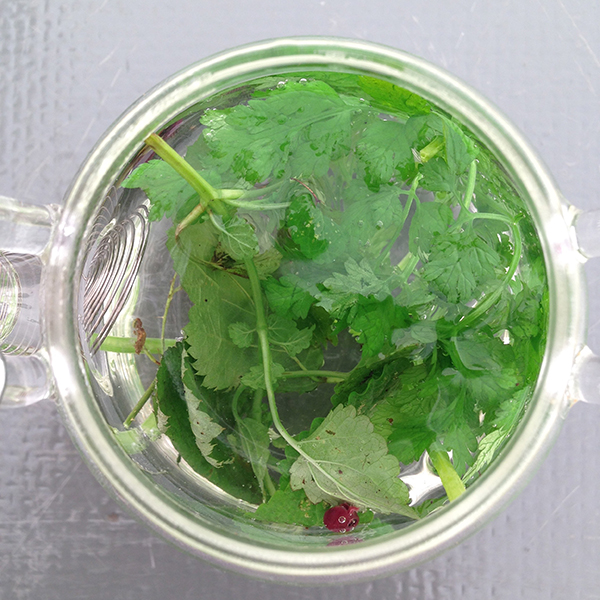 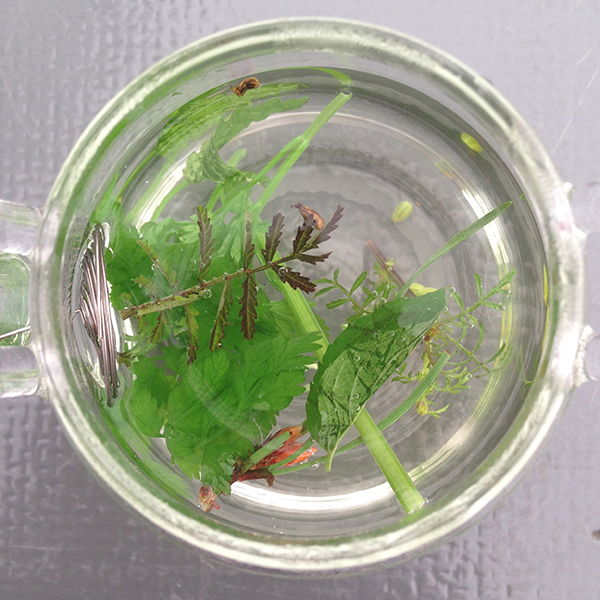 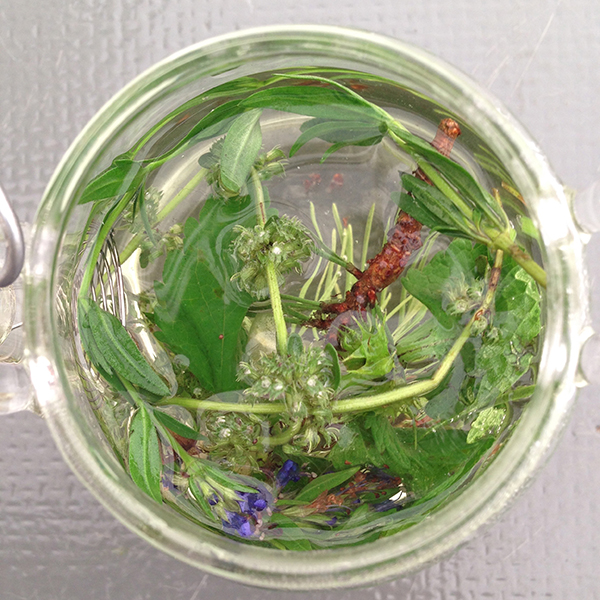 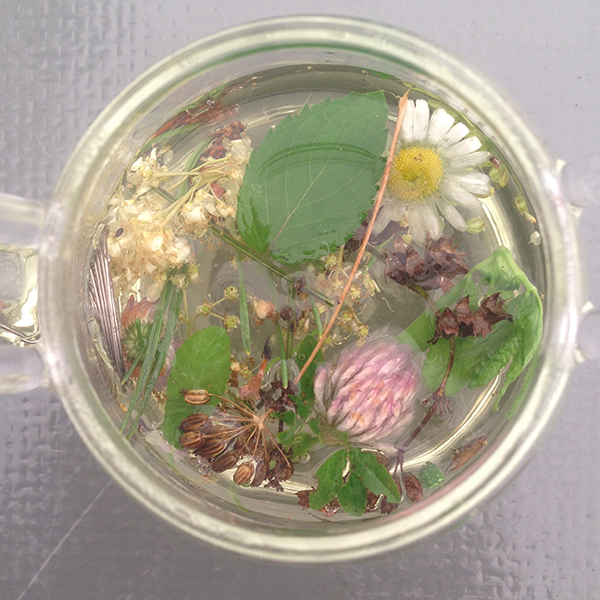 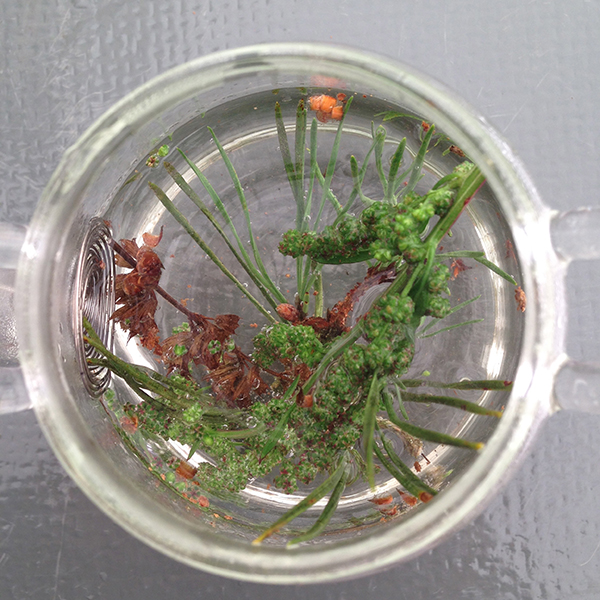 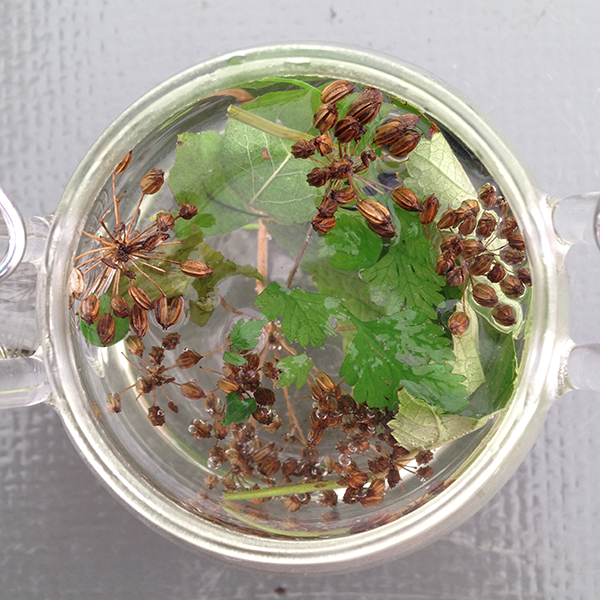 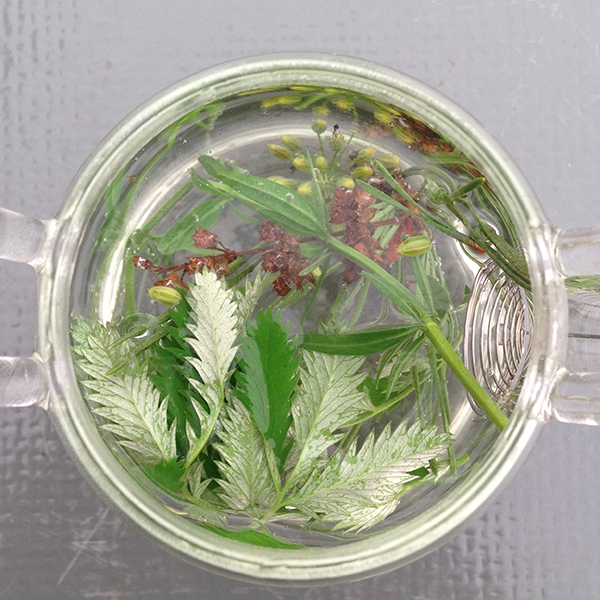 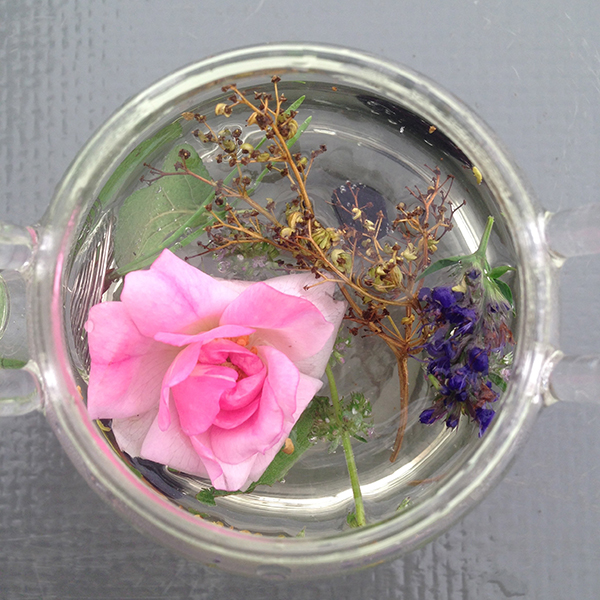 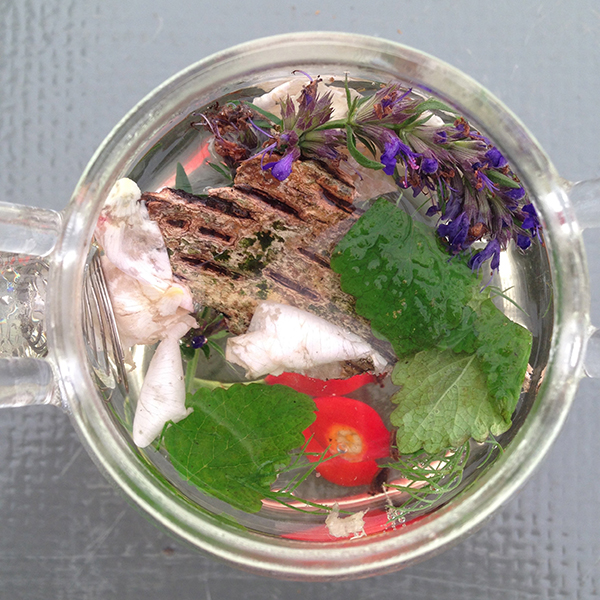 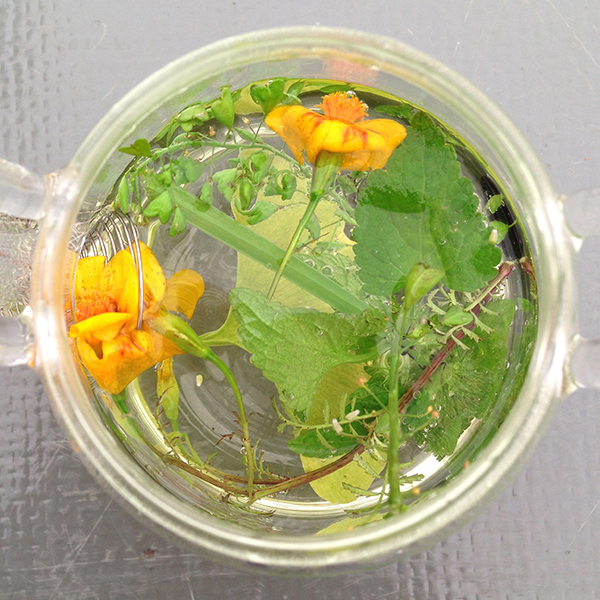 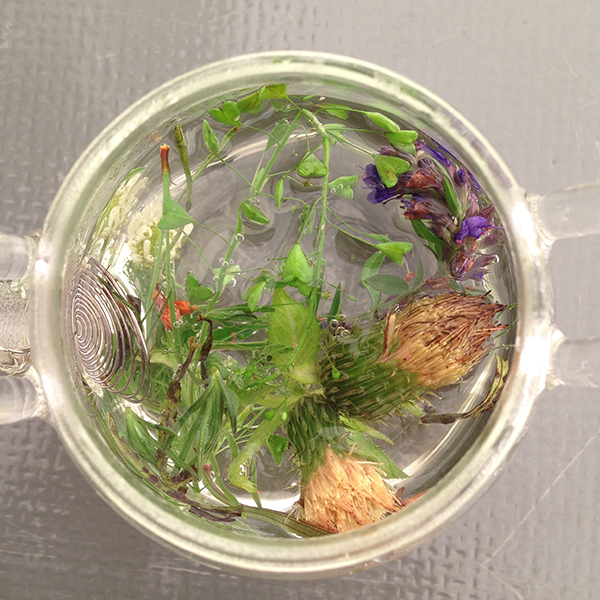 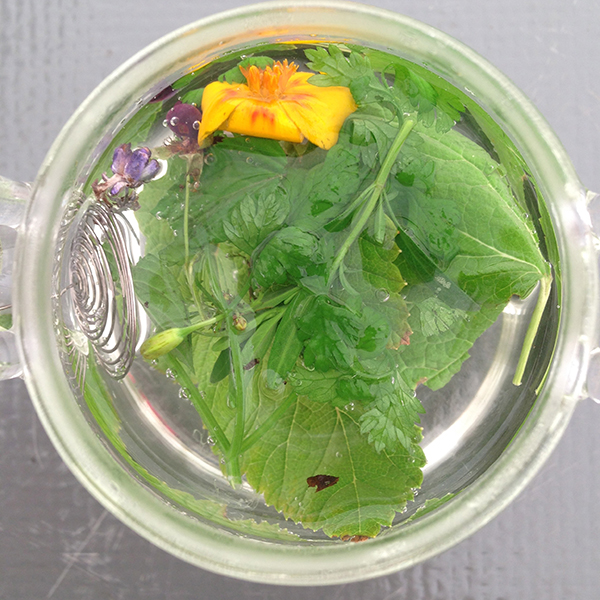 Example of A Tea Garden questionnaire completed by a participant: 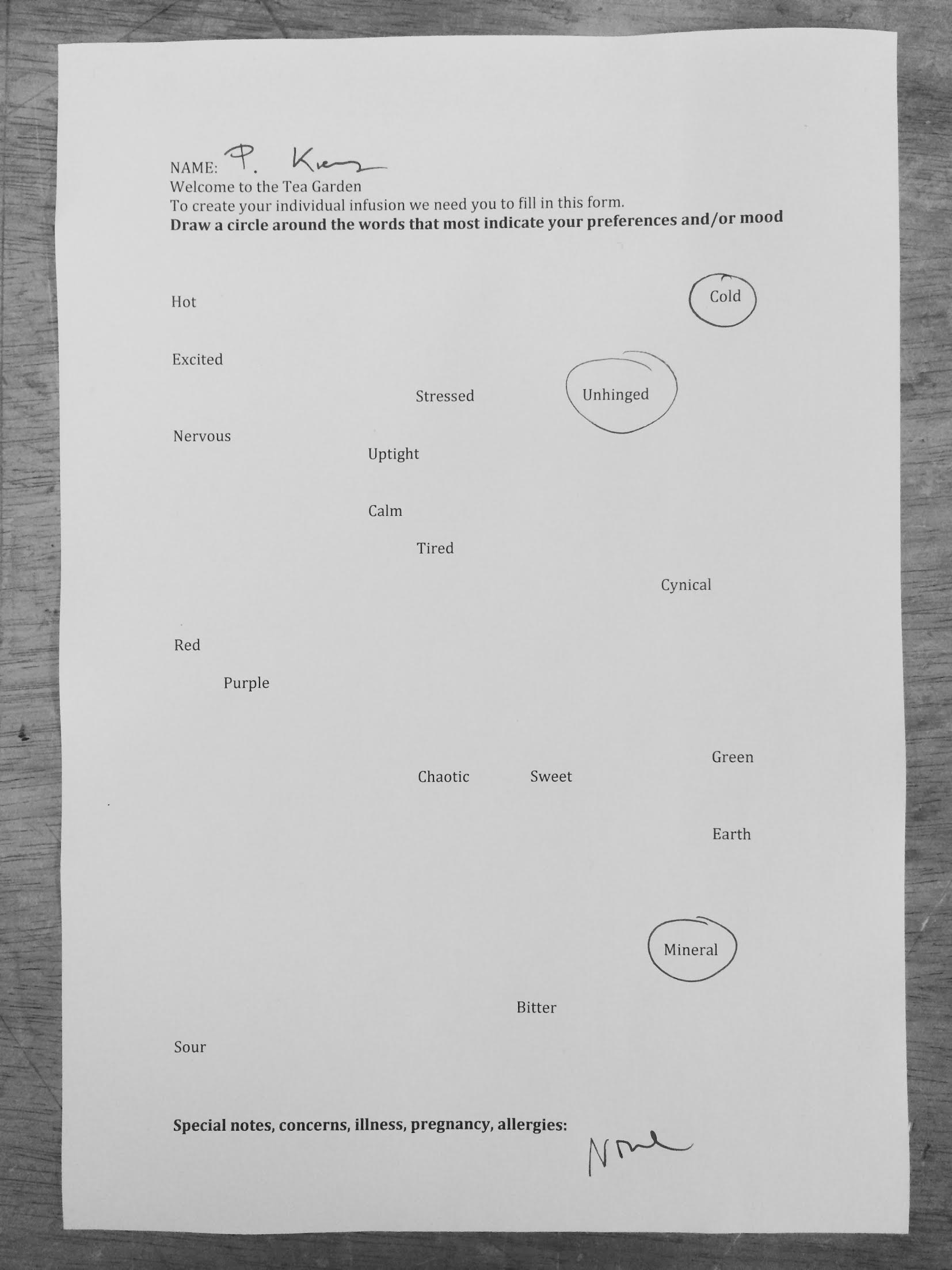 A non-exhaustive list of ingredients for the teas served in the Tea Garden at HKW: