Notes to Screenwriters by Vicki Peterson and Barbara Nicolosi

Posted by the editor on Dec 11, 2015 in Book Critic, Critic, Theatre Education 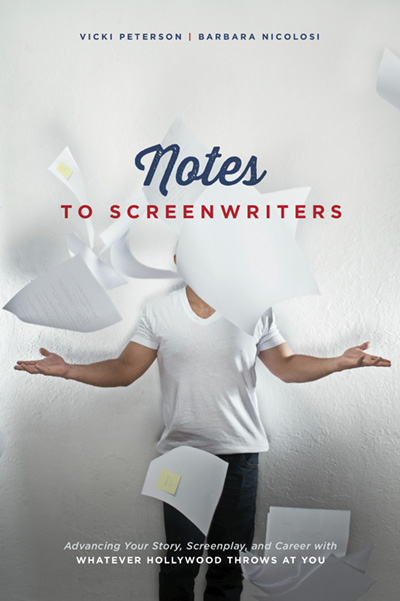 Notes and the Life of Screenwriters

Another amazing book by the great publisher Michael Wiese Productions, who keeps proposing books of great quality in the domain of film. Notes to Screenwriters is a must-read for any working screenwriter who is serious about advancing their career and bringing it to a whole new level.

Vivki Peterson and Barbara Nicolosi have been for many years working screenwriters, writing coaches, and script doctors in Los Angeles. They have coached many writers, and being writers themselves, have faced the numerous notes that any screenwriter receives all along the process of developing and writing a script: notes from fellow writers, from agents, managers, from producers, directors, and so on. And let’s face it: most of those notes are written in a language that often doesn’t make any sense to the writer.

Under the pretext to help writers decode these often abscond notes, Vicki and Barbara provide a book that decomposes the writer’s work into its essential components, making it very clear what all the steps of this process are, and how to handle them. With this book in hand, the writer is faced with a very demanding self- and work-examination, demanding but very gratifying for those who are up to the challenge.

The book is divided into 3 sections. The first section, “Broad Notes”, reviews the various elements that writing notes can encompass, namely the storyteller, the story, the arena, the characters, dialog, the theme, tone and genre, spectacle, structure, and the cinematic aspects of the story. This section provides a roadmap of the various elements that any screenwriter is encourage to examine in order to provide a strong script. The second section, “Line Notes: Screenplay Style and Grammar”, provides the writer with practical tools about how to format a screenplay, what kind of style to use, and some do’s and don’ts. The third and final section, “The Working Screenwriter”, deals with the professional life of a screenwriter: what are the various documents when developing a story, the screenplay being the last of them; how to deal with other writers, and with producers; and how to network efficiently as a writer.

An indispensable book for writers who already have several screenplays under their belt and are serious about making a living out of their craft. This book doesn’t tell you how to write a good story (there are other books on that topic), but given that you have a good story, it teaches you to make it marketable by avoiding all the mistakes that would lead your script directly to the garbage can!

Link to the book on the publisher’s web site.